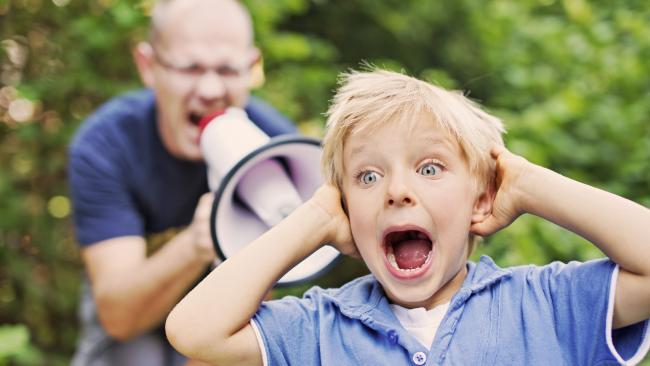 Recent studies show that yelling at children can have traumatic effects on their development and often leads to aggressive behavior later in life. However, there is overwhelming evidence that yelling can also be an effective tool for silencing an insolent child. So how does a parent keep command and still avoid those pitfalls? Dr. Barbara Holland, Chair of Child Psychology at Clearwater Research & Development, claims to have found a solution:

Yell all the time.

She states, “Yelling is a proven method for control and manipulation during the early stages of a child’s development. There is no other strategy quite like it to maintain the authority crucial to the parent/child relationship. My research suggests that yelling sporadically gives mixed messages to children, whereas a more consistent approach will garner positive results.”

Dr. Holland’s work focuses primarily on the effects of volume variations of speech on a child’s psyche. Her data showed that a near constant state of increased volume produced the desired effect. “If the parent sustains an elevated level, and it has to be constant, the child will remain in a state of confusion and fear, thereby ensuring obedience. We sampled 20 families over the course of a year. The parents were instructed to yell at all times, whether the child was disobedient or not. The results were encouraging. The majority of the children resisted the temptation to speak up and oftentimes refrained from even asking to go to the bathroom. The parents seem to enjoy the process, as well,” Holland says. “The key to success was consistency. An average 95% yell-rate produced an impressive margin. Anything less and the child regressed. Surprisingly enough, that only happened in two of the families tested. The other 18 sets of parents adapted quite easily to the constant yelling.”

Any long-term effects? The scientific community has had mixed reactions to Dr. Holland’s work and some claim it only exasperates the problem. Dr. Holland addressed her critics. “I understand the skepticism. Who knows what could happen twenty years down the line? But hey,  kids are resilient, right? If it doesn’t work, I’m sure they’ll shrug it off. Worth a shot.”

Dr. Holland drew inspiration for her unorthodox approach from her own unique upbringing. In the early 1950’s Dr. Holland’s father, Dr. John Holland, Jr., led a study examining the effects of isolation on pre-adolescent boys. The subjects were handpicked from a Catholic prep school in rural England and flown to a remote island in the Pacific Ocean. They were equipped with nothing besides what they could salvage from an airplane wreck. The results were controversial to say the least. The boys reverted to a savage state by forming tribes that often clashed violently and established a rudimentary hierarchy by the use of a conch shell. Dr. John Holland, Jr. was later exposed for having orchestrated the crash and conducting the experiment in secret.

Dr. Barbara Holland defends her late father. “My father was a pioneer. His work was controversial, but groundbreaking. Without his guidance in my youth, this yelling study would never have come to fruition.” At a recent symposium at Cambridge University, Dr. Holland was asked how her father’s work influenced her career. She responded simply by saying:

“The first rule of Fight Club is: You do not talk about Fight Club.”

View all posts by Adam Dennis